For a year now, I have a ranger companion, a Dunadan boy who from time to time travels with me to the wilderness or patrols the Breeland. I try to teach him stealth, archery and track - lore and also the love of smoke on the food you eat, moss on  huge boulders,dramatic landscape and free air. We cook and eat and play and walk and sleep in shrubs and woods. I am very thankfull for this little warrior and i hope we will travel many more miles

Here is a short account of the work that draws from one specific fictional culture from Middle Earth. The followers of Beorn, people of the Anduin vales, kin to Woodmen and Bardings and enemies of Shadow. From what i know about Tolkiens cosmology, these people represent ancestors to ancient Europeans in a sense that Middle Earth is fictional mythology.
I love Beorn character in a book and i like his ability to change into a wild beast, to me its very reminiscent of Tiermensch idea of old germanic art. I wanted beorning culture to visualy resemble old germanic art, but without actual citation. Here are examples and you may judge how i succeeded. 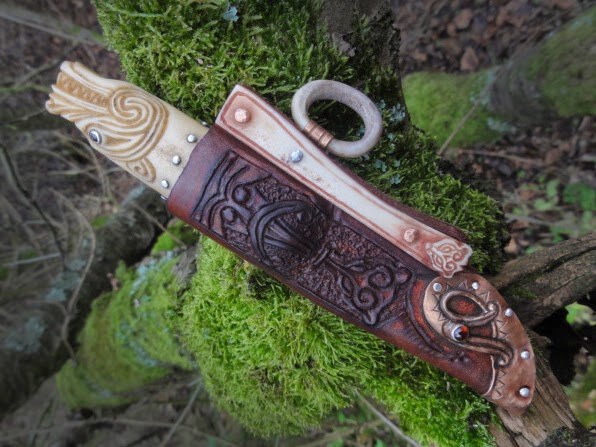 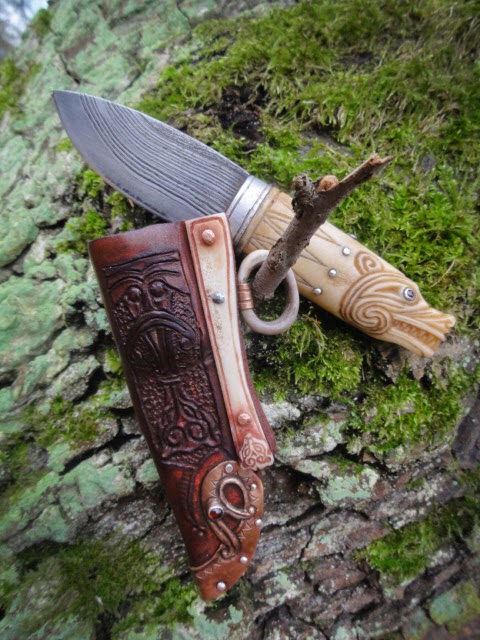 my latest work,a small nekcknife with anler handle with silver and garnets and ornate sheath 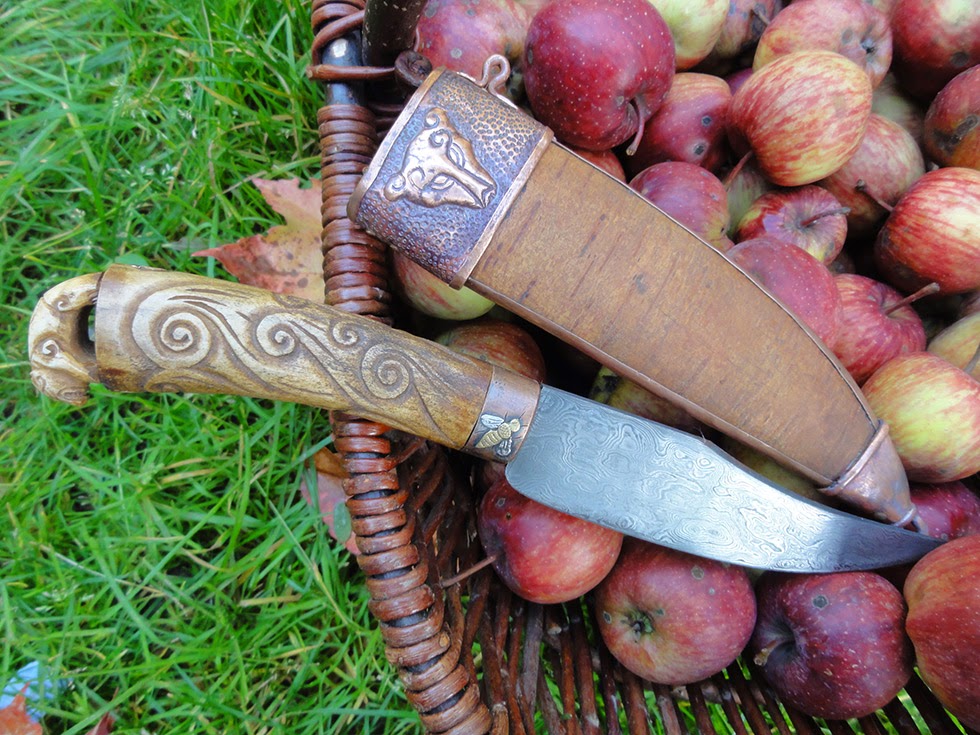 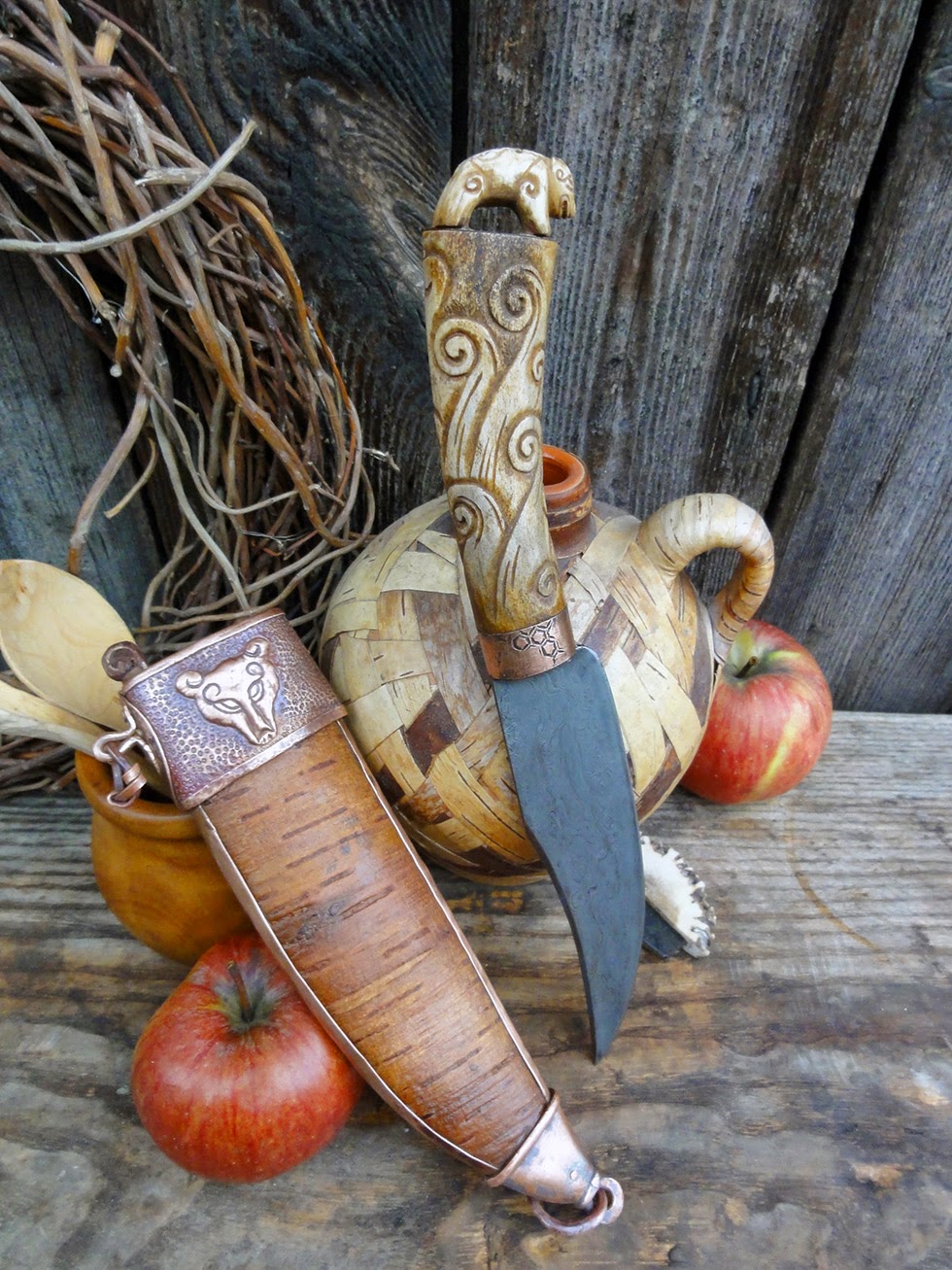 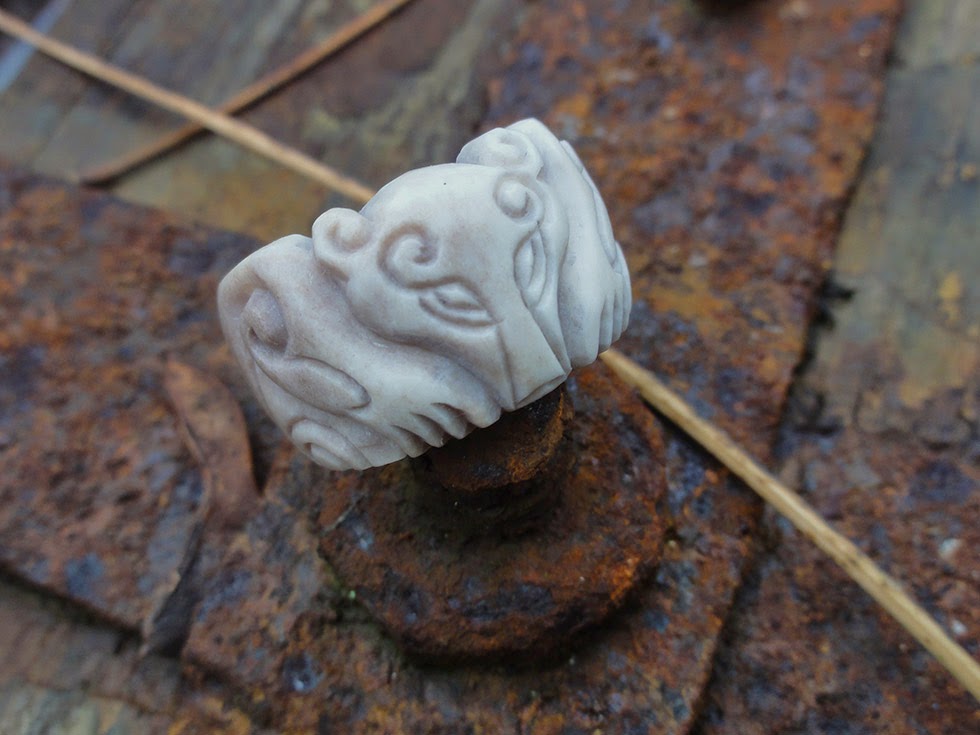 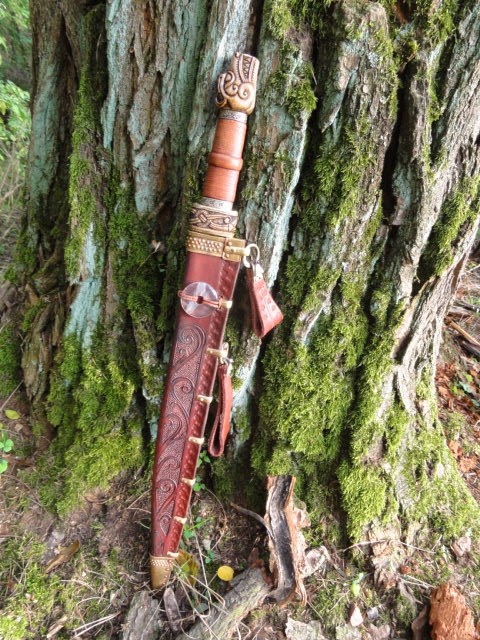 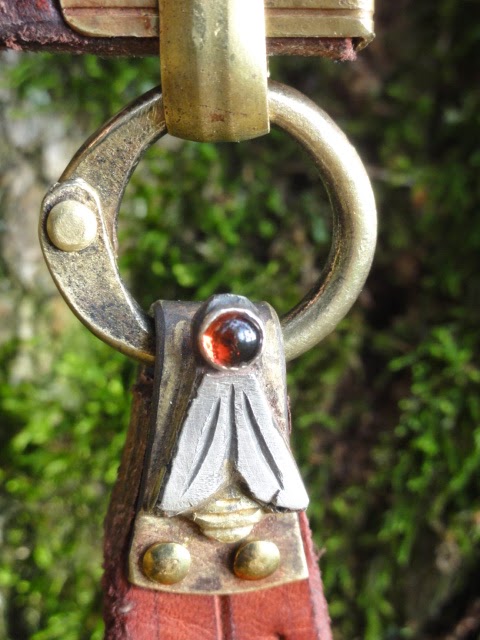 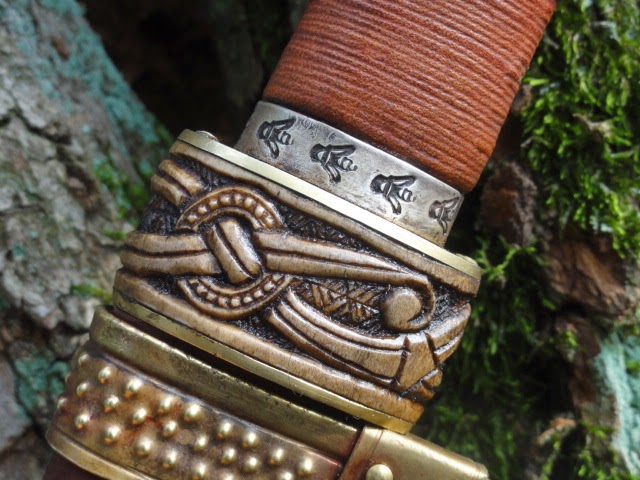 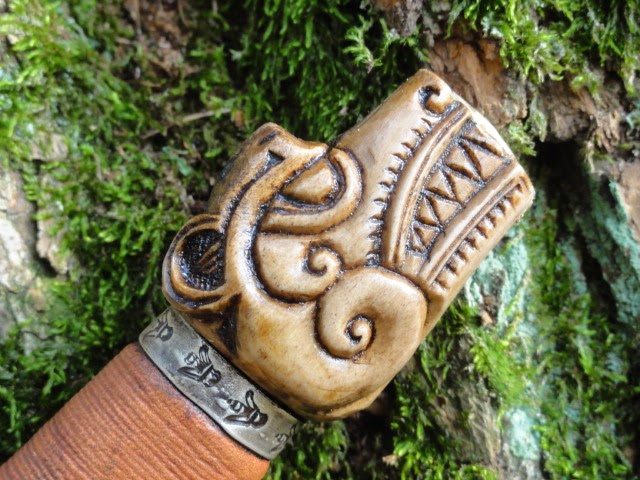 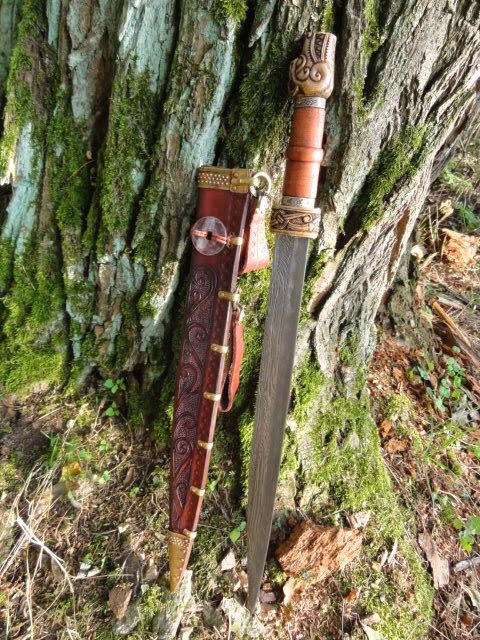 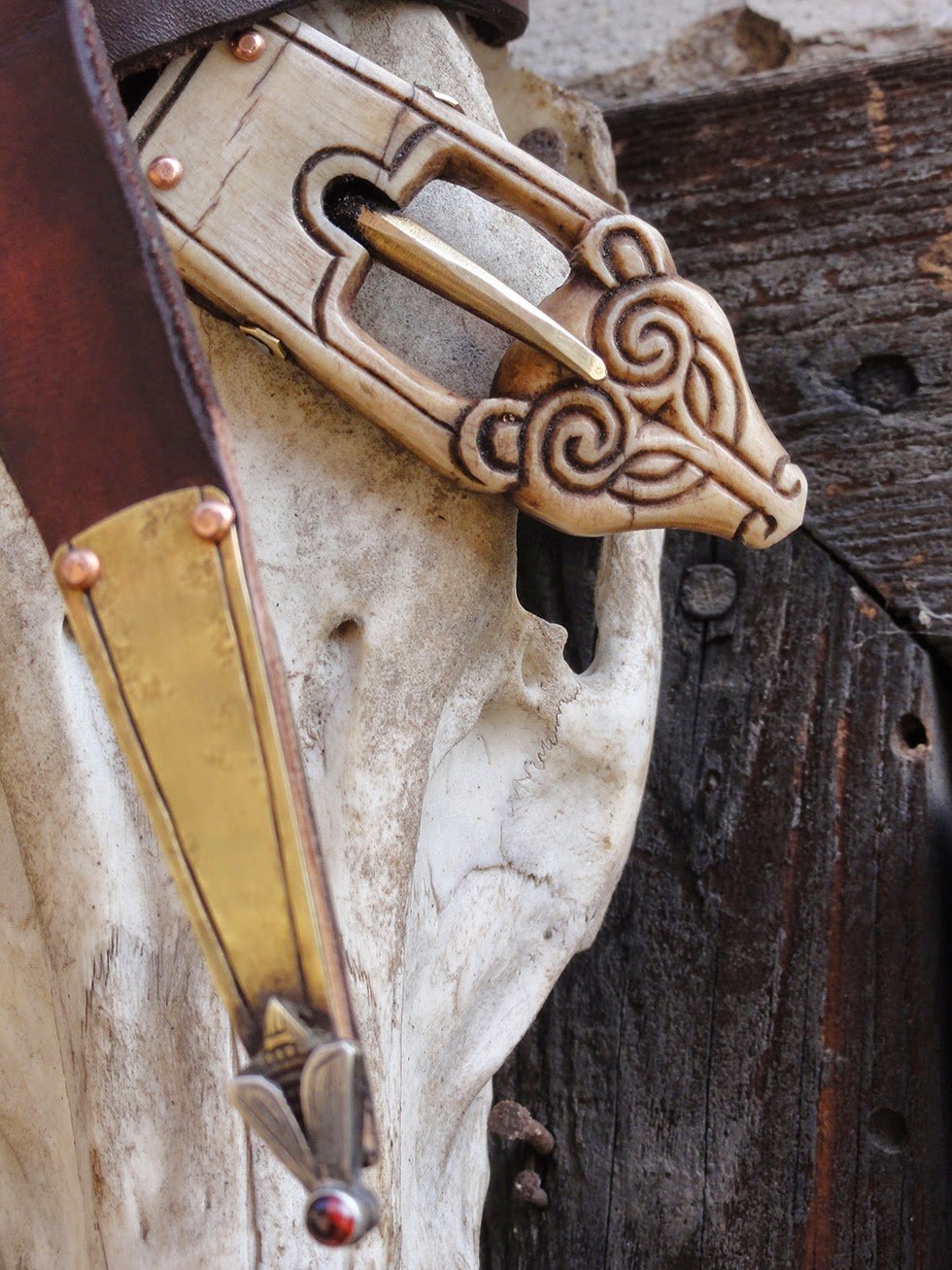 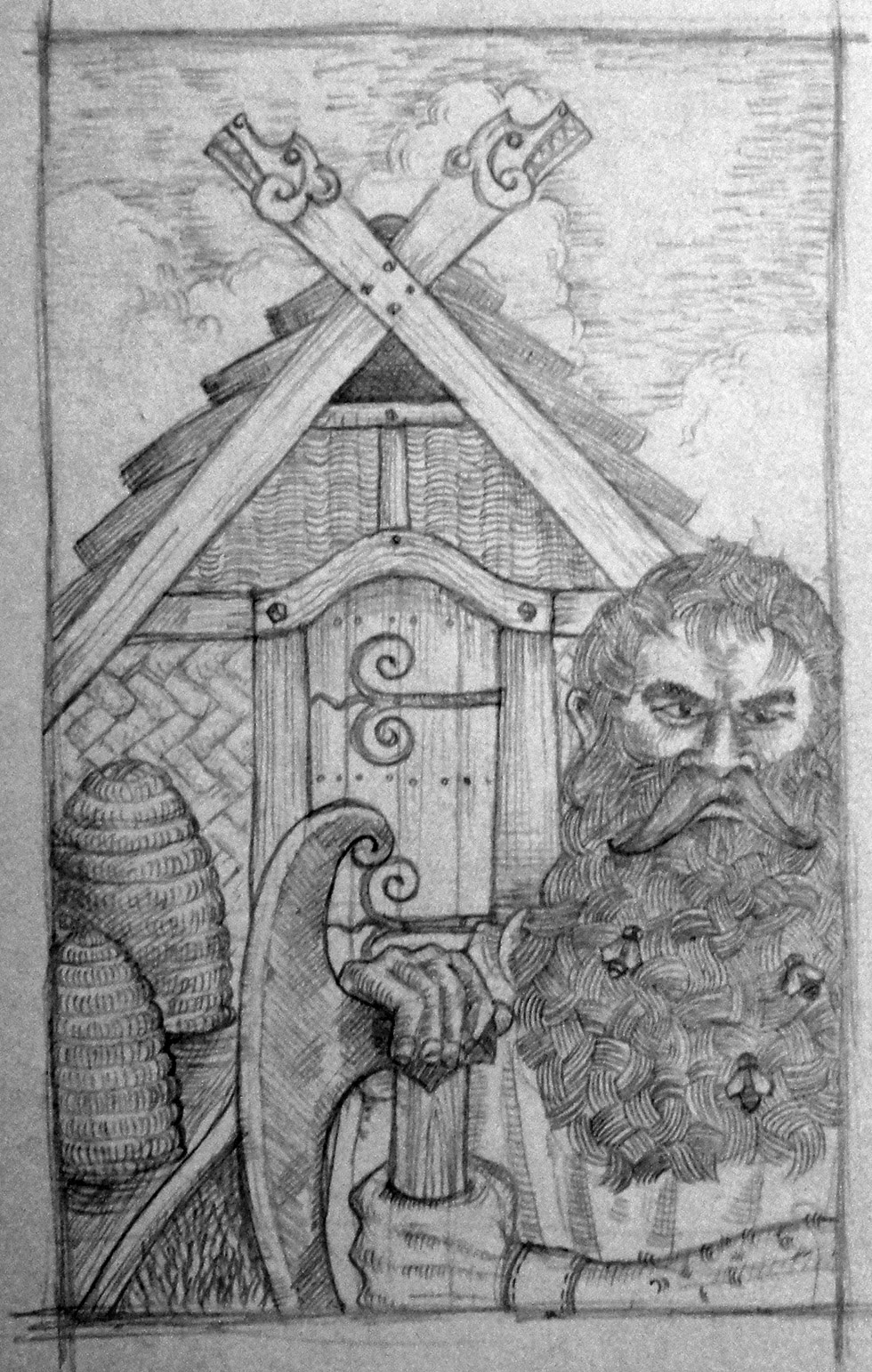 and here is my drawing of the man himself as Bilbo met him, still solitary and not a leader of folk

Finaly, Myles Mulkeys magical poem he wrote for me
"Where once a bear
had made his home,
a man now lives there,
all alone.
Mead he drinks
and honey eats,
and runs faster
than any beast.
But now and then,
some men have said,
the bear returns
to his old bed.
And sleeping there
beside the fire,
his hunger grows,
his growling dire.
And forest-men,
when passing there,
are terrified
of that old bear.
With unstrung bows
and heads hung low,
they softly walk
through the meadow.
They do not dare
to hunt with hounds,
and are careful
to make no sounds.
And when they see
the fearsome bear,
they know they are
alone out there.
For never when
the beast does roam,
can the bee-man
be found at home."
Let me know your ideas and thoughts and thank you for your attention
Vystavil gullinbursti v 14:41 2 komentáře:

Conjunction of the worlds

Its incredibly long time without any posting and i have now pretty lot of ideas what to write about, so lets jut start with a short contribution of my first tattoo design. 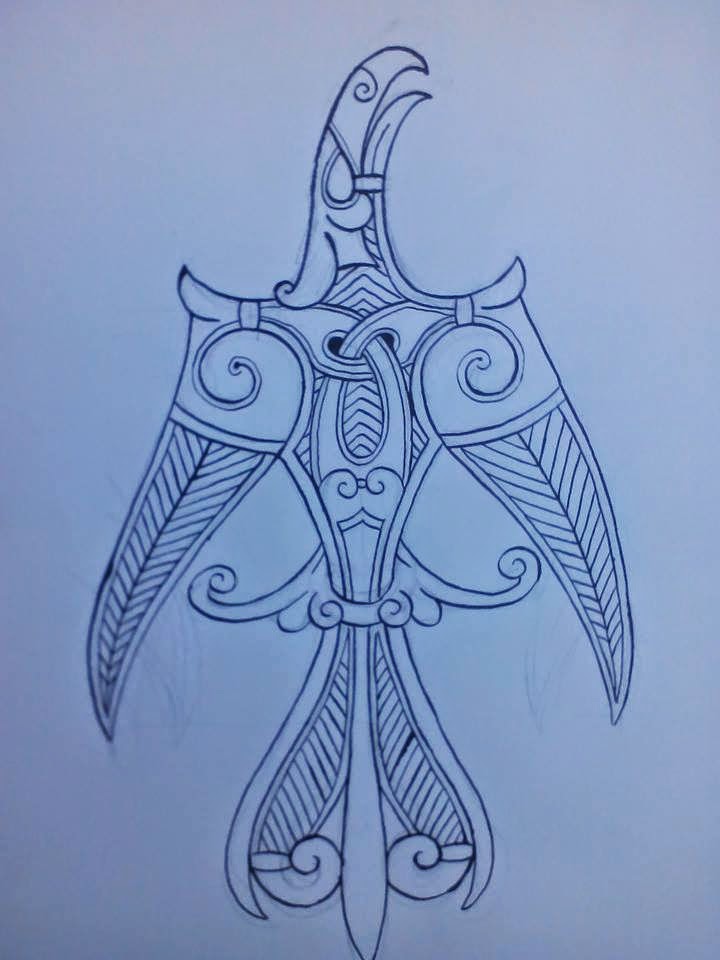 My friend and returning customer approached me and honored me with an opportunity to design his first inks. It was a great honout but also quite a responsibility, as it would be hard to imagine more personal art than this. His life story is strongly connected with Raven, so i went for this theme for one of his forearms. I was inspired by a ringerike style ravens and added some "viking baroque" to reflect the more organic technique and material than metal, stone and occasional wood or antler examples that survive to our days in decaying soil. We originaly thought about having two of them, slightly varying, but finaly the decision has been made to go with just one raven.
The other motive was much trickier to conceive, draw and it will be much harder to explain. But let me try this. Its a known fact, that J.R.R. Tolkien set his Middle earth in our world, not a distant planet or paralel universe. It was made, basicaly as our ancient meta history. I usualy invent my own art styles i use for Middle Earth artifacts, but when my friend suggested ME theme for the other hand, i was at unrest, because i as a style purist didnt feel its ok to have a viking style on one hand and fantasy on other (that weird i am!!). So while driving a long distance from Norway home, i found out the solution, that lays in the fact that Middle earth is our world. What if the svartalfar of the norse sagas are the descendands of Durins folk? And what if they preserved the stories of old? And is it too much to suppose that the dwarvish smiths were those, who inspired the germanic craftsmen? So i went and re-invented a ringerike style in slightly twisted way. added some elements, exagerated on others... So without moch more gibberish, i am presenting you a long gone tale of Trór, the king of the mountain and Smaug the firedrake. Note the ravens on the mustache - ancestors of Roac, and the Arkenstone as a crown above mountain kings head. 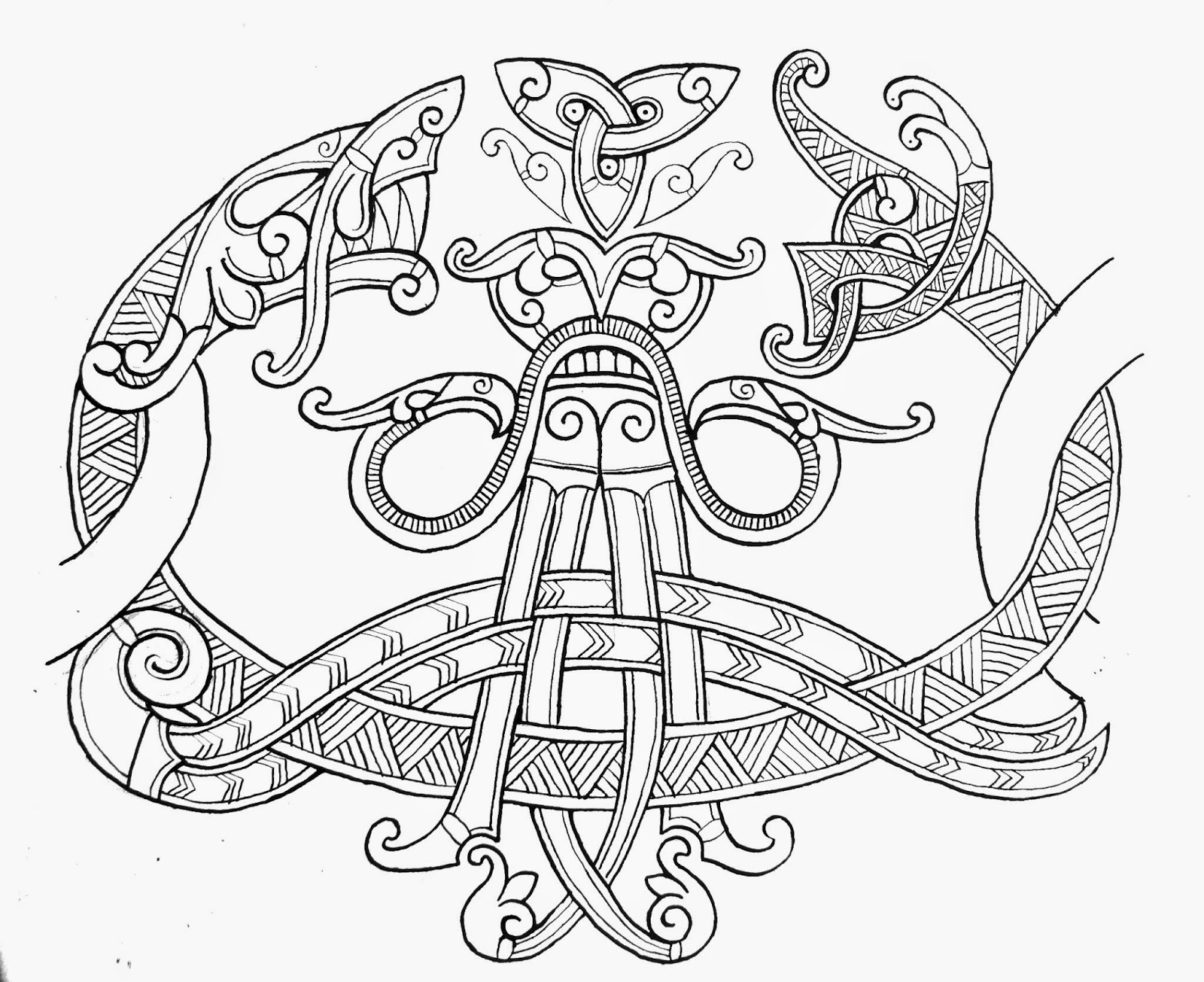 Walking the other lands

Long time no post, but clumsy chisel work that ended up with injured finger got me thinking and slow down a bit. so here is the blog about my non historical work.
In my work that draws from my creativity and not from my knowledge of historical styles i tend to create visual language that represents the culture i am creating or illustrating. I think that ad-hoc item, created just from thin air seldom work well.
Most of my fantasy work draws its inspiration from Tolkiens Middle Earth, so i will ilustrate on that. 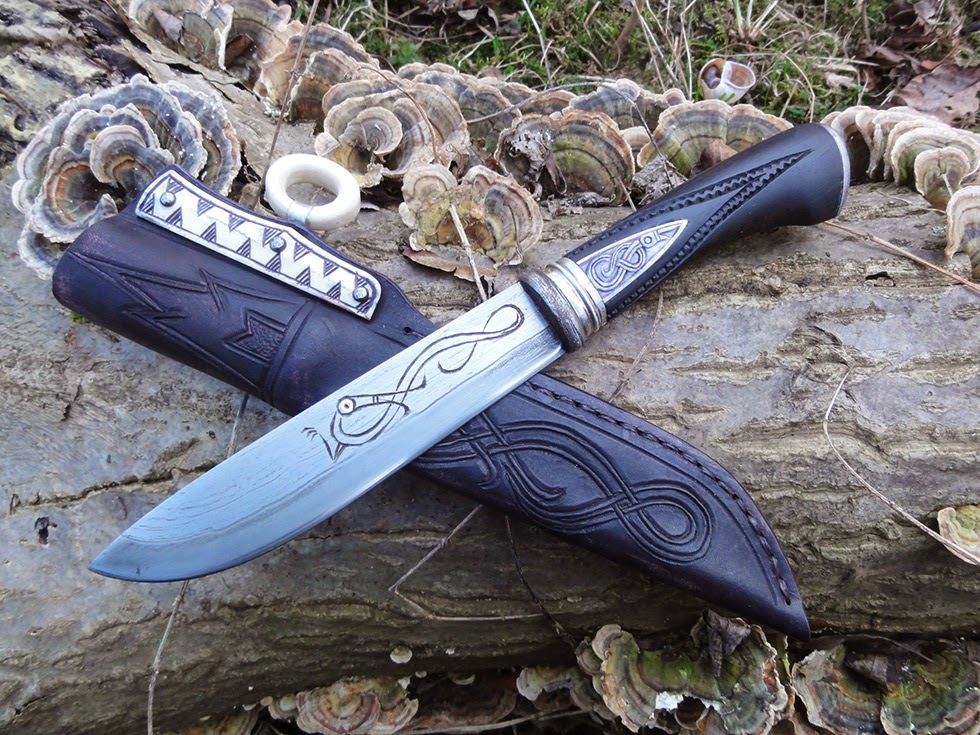 the knife above is in Dalian style, its based on germanic animal style but apparently its obsessed with dragon. I did used germanic influence because Tolkien made Dale very Norse like. The idea is that its the EARLIER version of germanic styles so its very simple and has a very linear character 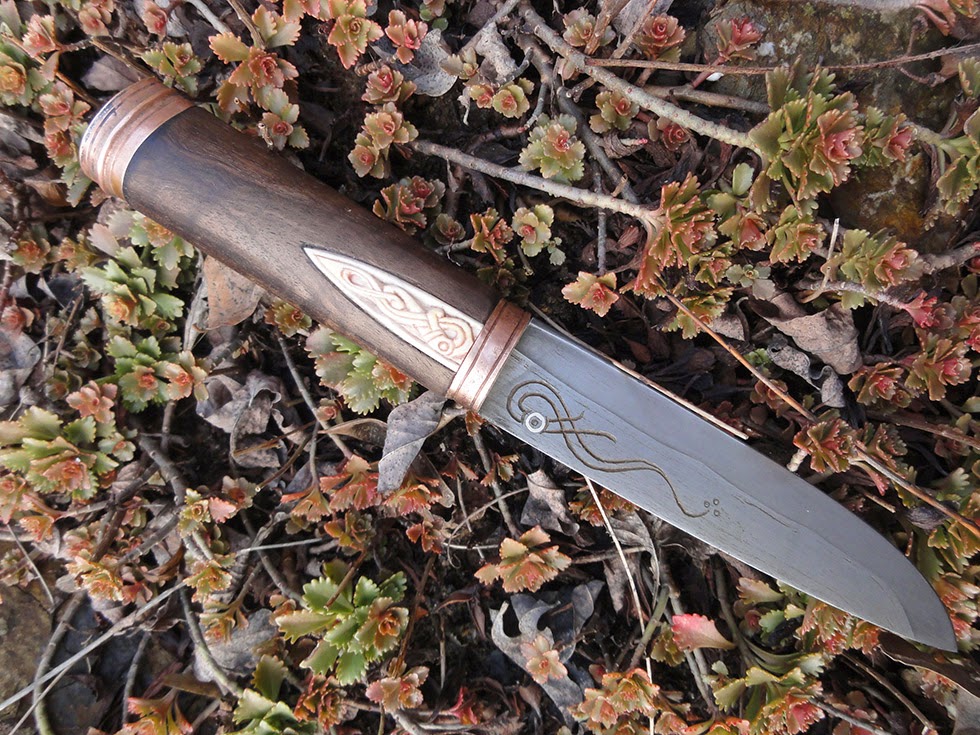 Another Dalian work, still in progress, this i imagine as later more joyful and colourful but still very coherrent 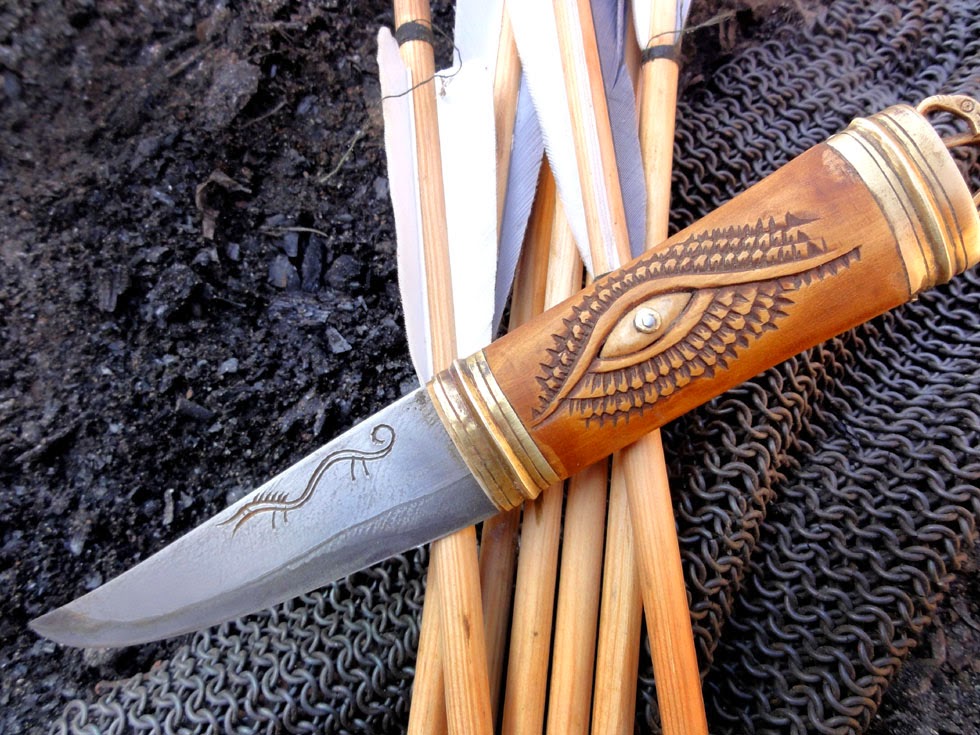 This is the first piece i made in the style and its not so developed in systematic way but you can already see some distinctive features - a bone inlay in wood, a linear depiction of dragon, engraved blade and sheet metal ferrules.

In the honour of Beorn

i had a hard time  inventing how to portray Beorning culture, until i saw work of scottish painter Jon Hodgson. Some details on his work gave me an idea to use stylised animals and spirals as an ornamental element. Now i am pretty much at home around Carrock 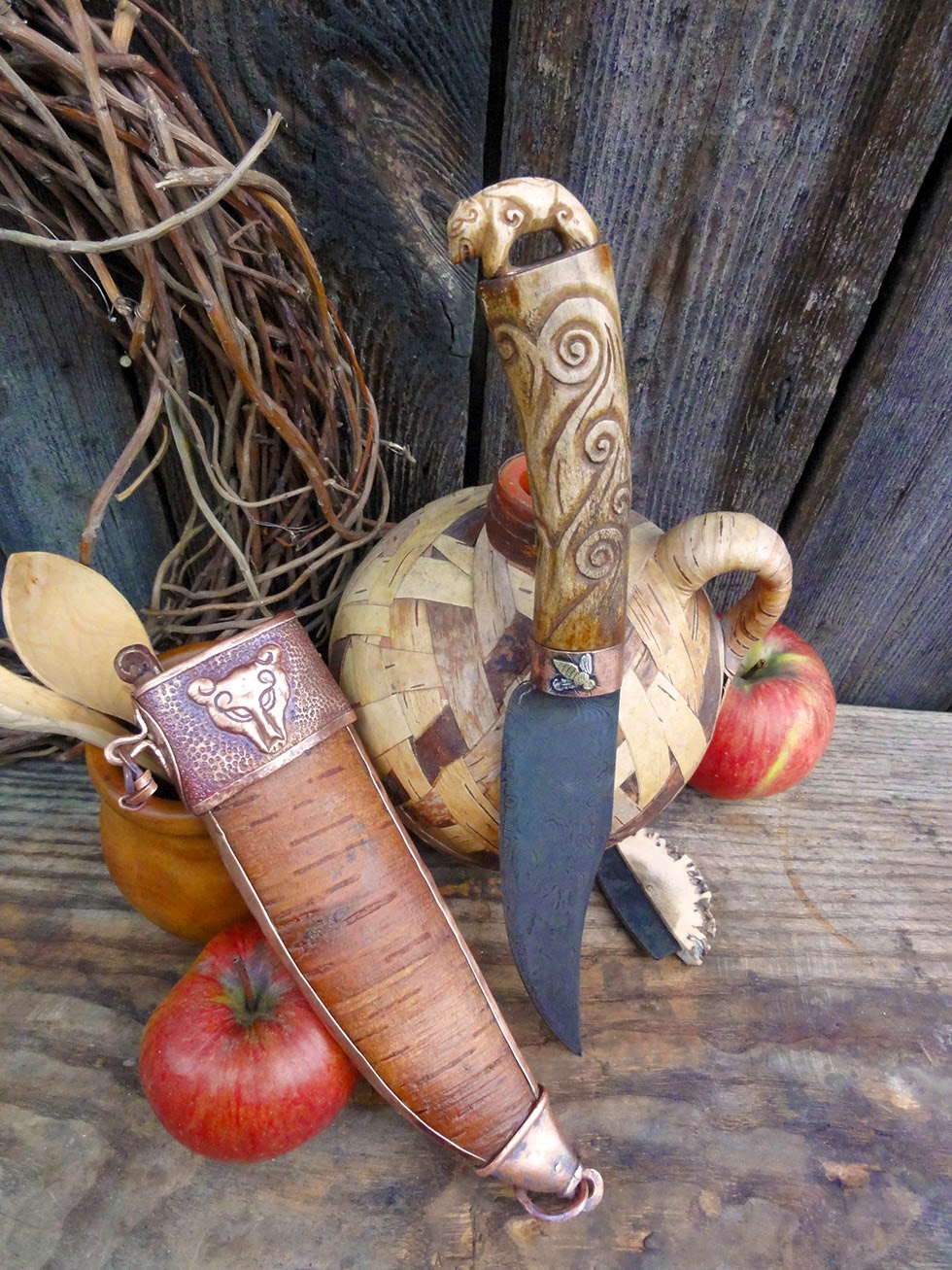 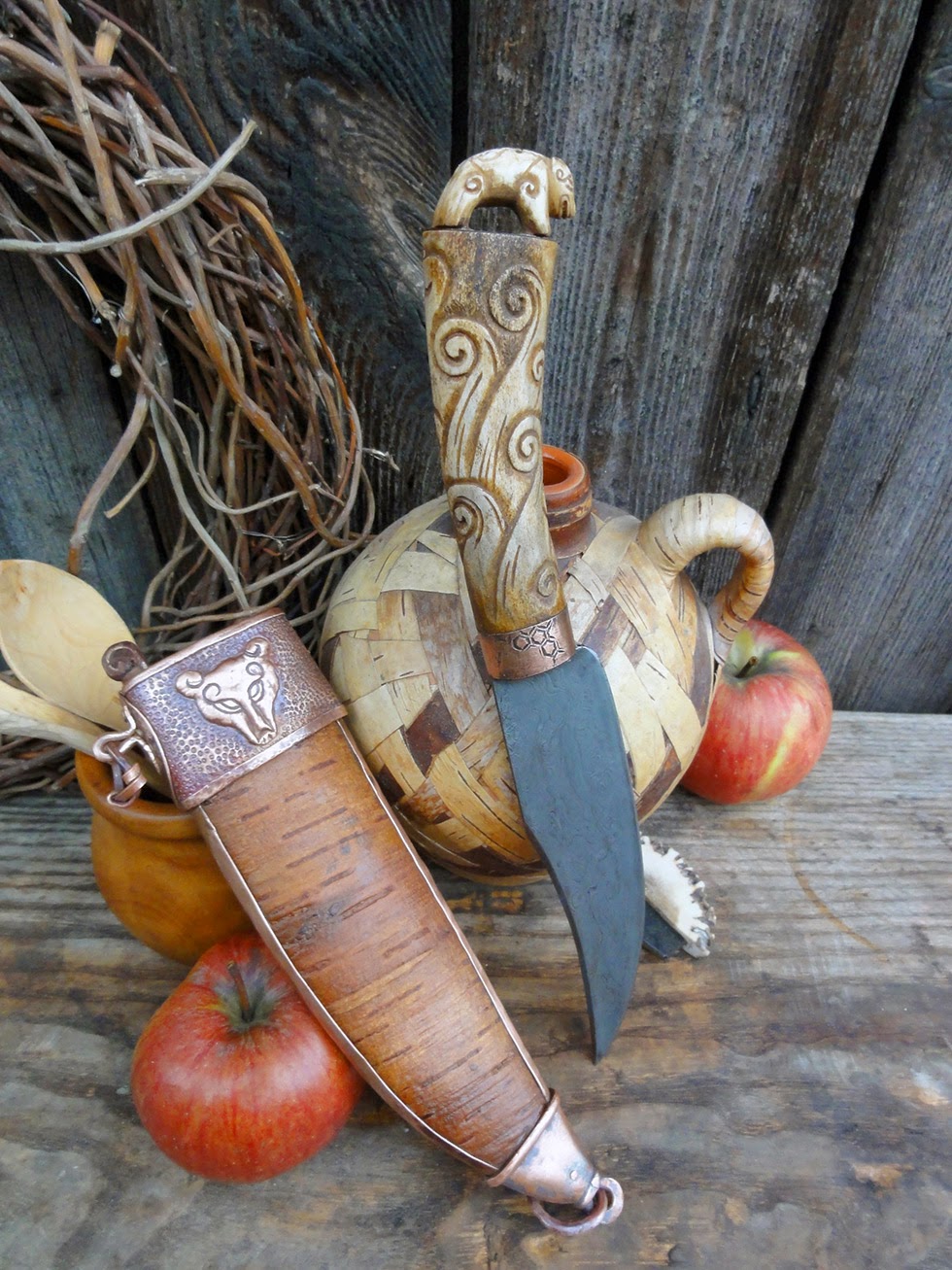 here above is what i named knife of Beorn, not only because of the symbols, but also because it was challenge to make cool scabbard without leather as i wanted to commemorate Beorns peculiar eating habits 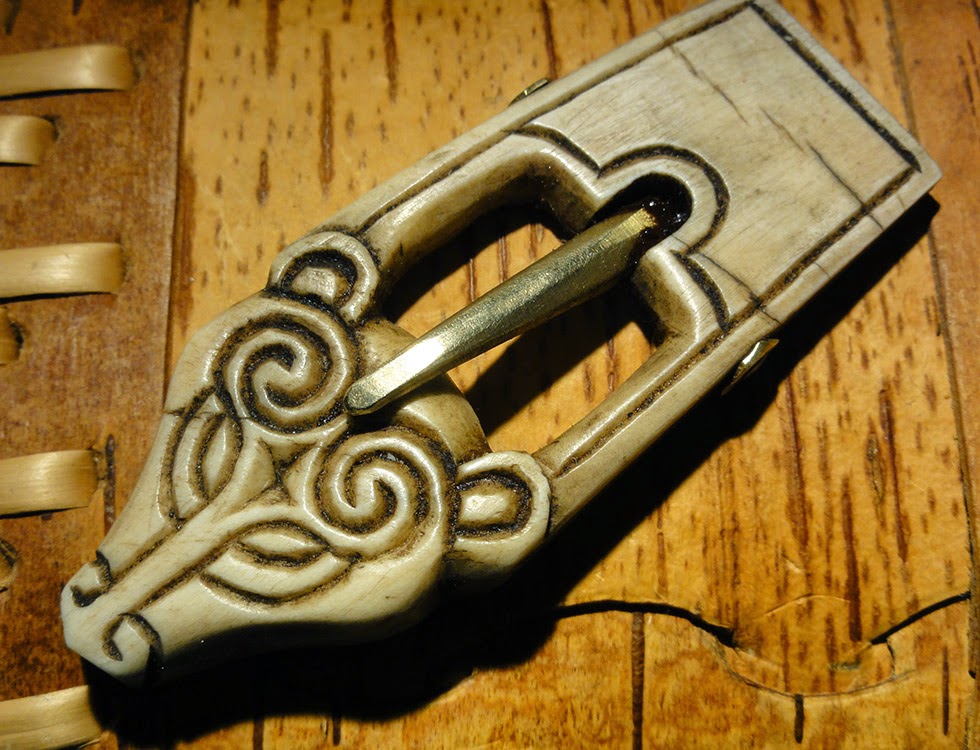 One piece antler belt buckle from this culture, the strap end will have a bee on it 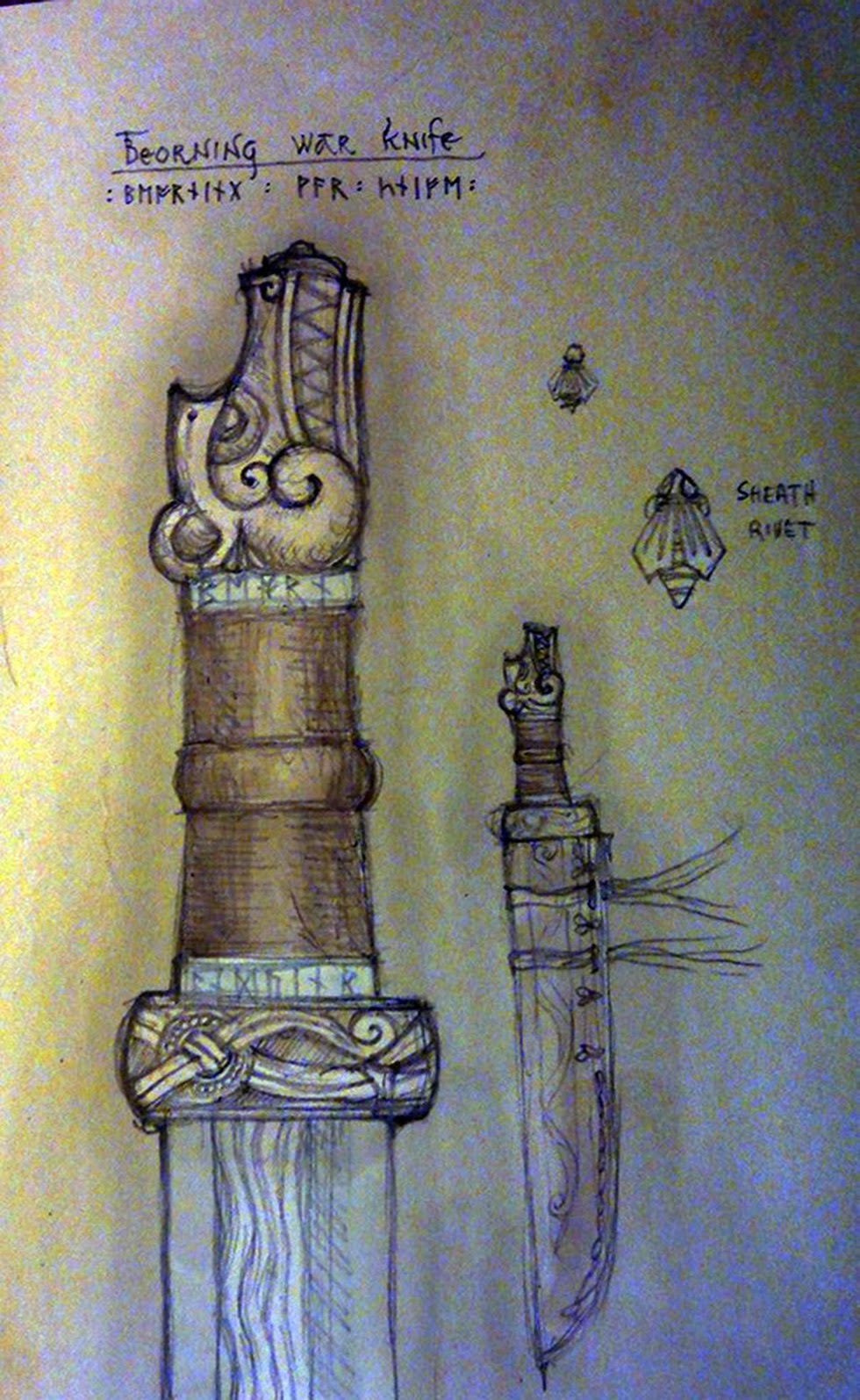 and i will finish with a future project sketch. Beorning war knife.

To be continued with other cultures...
Vystavil gullinbursti v 15:11 5 komentářů:

This summer and early autumn i was working on a series of blades from Vendel period scandinavia. It was great opportunity to learn to work in one specific tradition and also explore variations in blades and techniques. This period of history shows both stunning artistic coherrence and technical variability. Lets see the pieces! 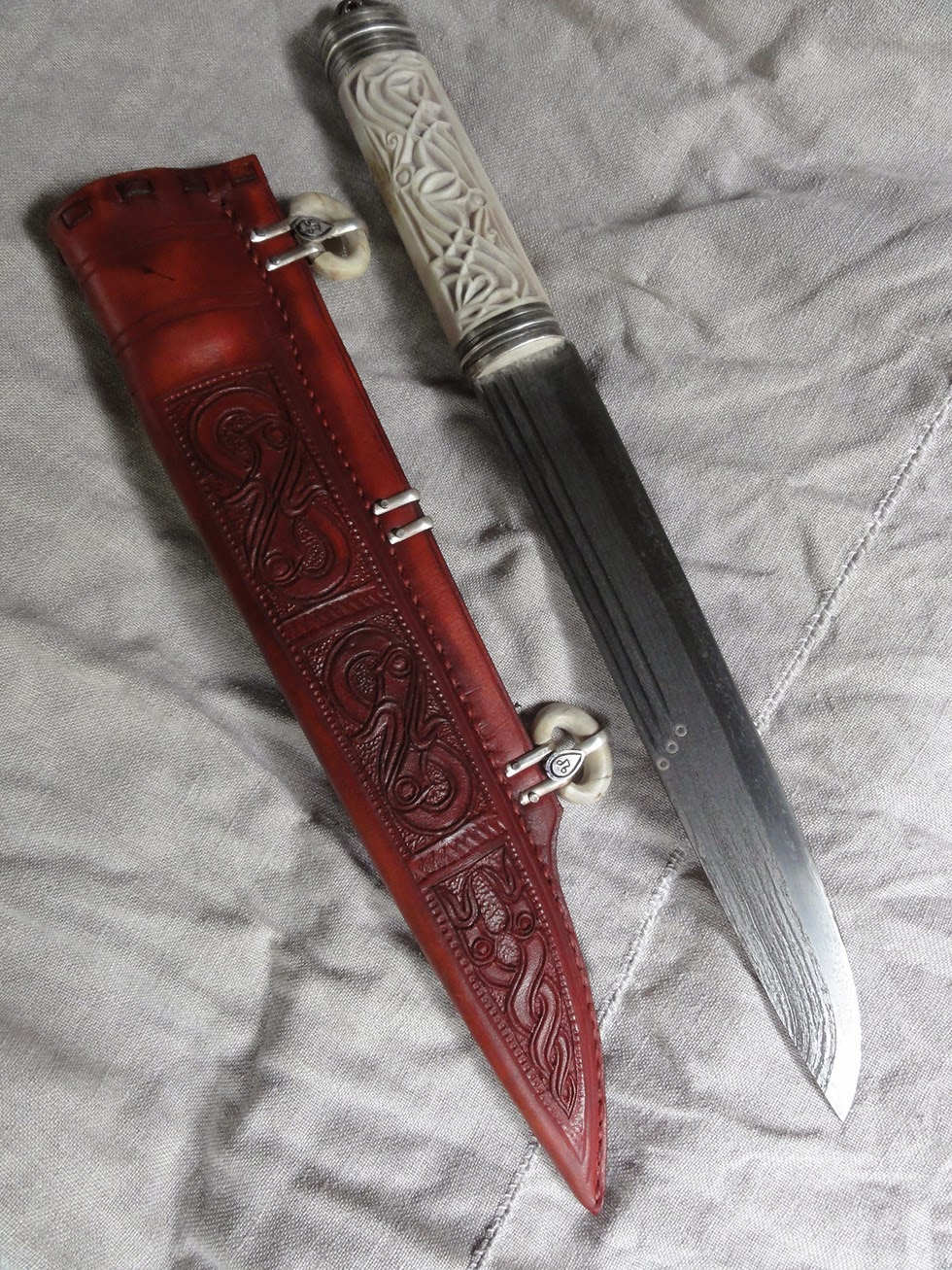 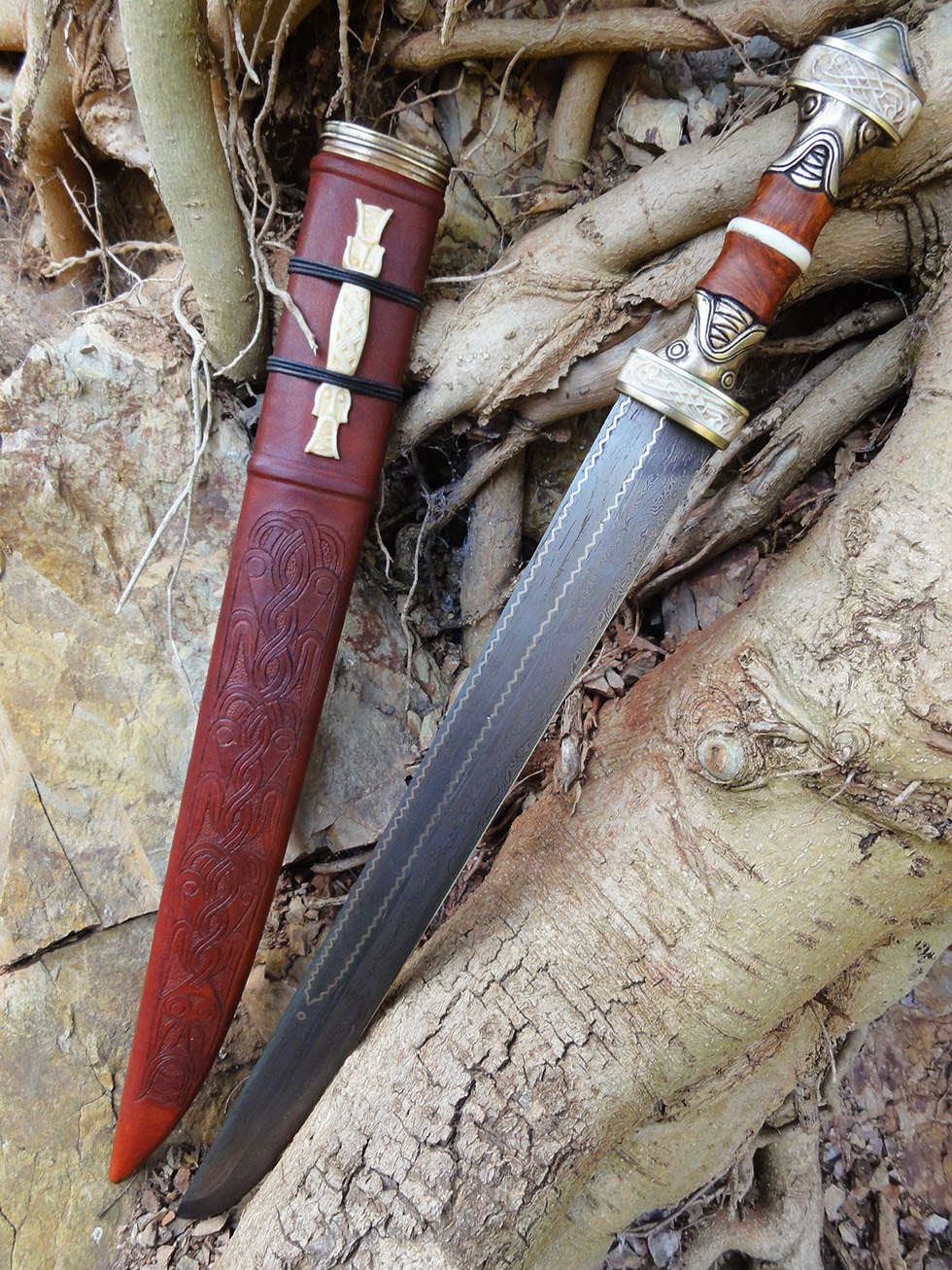 This style is becoming to be mine most favorite and i am looking forward to next works in it
Vystavil gullinbursti v 22:12 3 komentáře:

The germanic art is my main inspiration and the area i am most used to work in. One particular motive seems to be attractive to me very strongly and thats the reason i wanted to look more into it. Its the wildman face, the fierce face or mask. I am not sure how it started, maybe as an inspiration from roman coins and medals germanic wariors were seeing in contact and service of Roman army. Sure thing is that you can see those en face portraits early on in oldest germanc styles. What interests me the most is the merging of the face to fit the environment and style of the entire piece. Bellow you can see the head plate of bow brooch in Nydam style. The head between those two beasts is very reminiscent of roman heads but you can also see how later Style I saucer and button brooches developed from that.


Next one is the example of fully developed Style II art on Ultuna boat burial spatha scabbard. While the Sytle II is very international one and spreads over the germanic dominated Europe, incorporating en face masks seems to be very scandinavian fashion. Note how moustache grows to be body of two headed serpent

Norwegian strap end in bronze shows a fierce face in late Borre style. Note that the basic features are the same, big, circle like eyes, connected brows and the ribbon like moustache.
Fully developed ringerike mask motive as carved in the antler walking stick terminal (?). Even when the execution is very formalised and the style is very baroque, you can still see the Ultuna face in there.
Smaller version of face incorporated to a bronze buckle from gotland, easier to see common traits in here.
Finaly i attach some of my work utilising the motive. I hope you find the longevity of the motive fascinating and inspiring.